Wild Finish to the 2011 Regular Season

Posted on September 29, 2011 by rightoffthebatbook 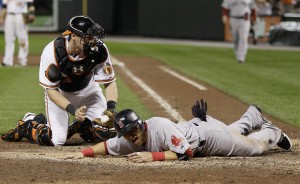 The division races were sewn up long ago. Things didn’t seem too exciting. But then all hell broke loose in the American and National League Wild Card races.

The Boston Red Sox finish the year 77-1 in games that they led after eight innings. They had been 77-0 until the wheels fell off in Baltimore.

The Atlanta Braves fell, in unlucky inning thirteen, to the Philadelphia Phillies.

Right Off the Bat congratulates the Tampa Bay Rays and the St. Louis Cardinals, improbable, season-hardened postseason contenders for the World Series.

2 Responses to Wild Finish to the 2011 Regular Season