Posted on October 28, 2011 by rightoffthebatbook 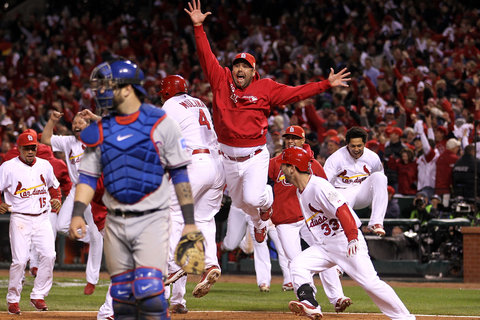 As the World Series takes on more the aspect of Pluto, with the baseball season being the rest (or inhabited part) of the solar system, the Texas Rangers and St. Louis Cardinals played one of the all-time great Game 6’s fairly into the East Coast time-zone morning. There was no way to predict the outcome; the only truism being the home team enjoys last-licks advantages in such situations, especially when it comes to inter-league play. For cricket fans, this “especially” means in the National League city or ballpark, there is no designated hitter (DH) for the pitcher or weakest batter on the club. National League managers, like Tony La Russa who is one of the storied best, are more adept at the double-switches (player substitutions) needed to stay competitive, even when losing badly. This is not to make excuses. With their opposition down to their final strike, twice!, potentially the final strike of the season, the Texas Rangers did not prevail. It is difficult to imagine a more spine-tingling Game 7. As noted in an earlier blog, this was already one of the truly memorable World Series of recent…well, memory.