Posted on January 25, 2012 by rightoffthebatbook 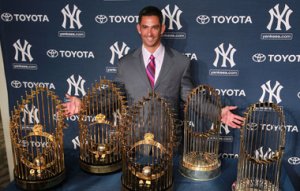 About the most-difficult day a professional athlete can have.

Yankees catcher of seventeen seasons, Jorge Posada, hung up his professional-baseball shoes yesterday, a month after Christmas Eve. I (Evander) had mixed feelings about him. I admired his strength in dealing with his son’s cranial development and the boy’s many surgeries. Being old enough to have watched the tail end of Yogi Berra’s catching days, Elston Howard, and Thurman Munson (not to mention Doc Edwards [!], Rick Cerone, and Butch Wynegar), I could never put Posada in the company of the three-named MVP backstops. (Yogi needs no introduction. Howard was the first African-American to play for the franchise. Thurman Munson won the Rookie of the Year Award. I have never shied away from my opinion, since his untimely death on August 2, 1979, that he ought to be enshrined in the National Baseball Hall of Fame.) I also found Posada to be a Grade-A hothead, whose emotions ruled his (considerable) ability. He took Girardi’s job as regular catcher of the Yankees, and when Girardi became his manager, there must have been moments of payback, no matter how the stories are spun. Everything erupted on May 14, 2011, as chronicled in this blog and everywhere else—there’s no point in belaboring the benching-and-tantrum incident. With so many recent “HGH retirees,” at least for the foreseeable future, out of the Cooperstown-induction running, it is said Jorge Posada would be a candidate. For anyone who might be reading: please! Check out any YouTube or playoffs footage of Thurman Munson.
Advertisement