Posted on April 4, 2012 by rightoffthebatbook 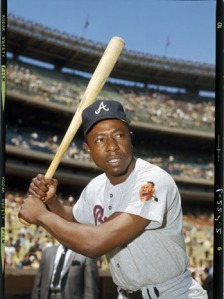 “Aaron methodically went about his business on the ball field. He turned the other cheek. But the bitterness remained.” (from Right off the Bat) (Photo by Louis Requena/MLB Photos via Getty Images)

The Hollywood Reporter announces a film on Hank Aaron. It will be made by the director of The Natural. As he approached and surpassed Babe Ruth’s sacrosanct lifetime home-run record, Aaron—who was playing in Atlanta at the time—was subject to racist abuse (in the early 1970s) as flagrant as any even Jackie Robinson experienced.

Co-author of the book, "Right Off the Bat: Baseball, Cricket, Literature, and Life"
View all posts by rightoffthebatbook →
This entry was posted in Baseball, Right Off the Bat Book and tagged Atlanta Braves, Babe Ruth, Hank Aaron, Jackie Robinson. Bookmark the permalink.