The Yankees-Mets Subway Series at 50

Posted on June 8, 2012 by rightoffthebatbook 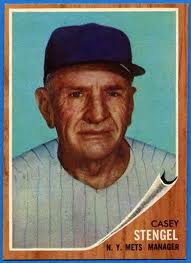 The Mets not only took the first regular-season Subway Series game from the Yankees in 1997 (I, Evander, was there), a 6-0 spanking, they won the very first meeting in a 1962 spring-training game.

The event was fraught with tension. Legendary Yankees manager Casey Stengel was now at the helm of the hapless Mets (a team that would lose 120 games during that first season in existence) after being fired by the Yanks following their weird 1960 World Series loss. The two Rogers (actually one Roger and one Rogers) exchanged insults: Maris had broken Babe Ruth’s single-season home-run record but five-and-a-half months before; Mets coach Rogers Hornsby (who would die a short year later) proclaimed that Maris, with his scientifically tapered and (literally) lightweight bat, couldn’t hit his way out of a paper bag.

Read all about it in this fun article, which comes by way of my bud, Stu Cohn.

(Thanks also go to another bud, eagle-eyed Paul Grant, for noting that in paragraph 17 of the Hardball Times link the correct Yankees player is Bill Stafford, misidentified as Terry Stafford [factually, the composer of the 1964 hit “Suspicion.”])