Posted on January 27, 2013 by rightoffthebatbook 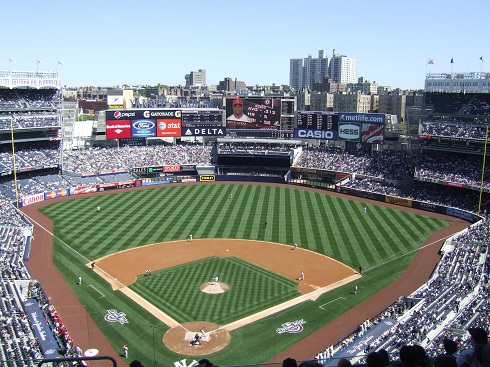 In warmer weather, the Stadium: One Right Off the Bat still promises to blog on as part of a series on ballparks

It has been quite a day. Closer to Right Off the Bat HQ, a poor dolphin, who lost his or her way, perished while trying to escape the toxic Gowanus Canal at the old Union Street bridge in Brooklyn. I am guessing that Martin may have been part of the helpless rescue unit, and if so that is extra-sad. In the meantime, it had been arranged for me months ago, by some friends, to take a tour of Yankee Stadium today. About an inch of powdery snow covered a lot of the field. The tour included restaurants, fancy and less so; a corporate suite; the press box; the opulent and sun-drenched boardroom (with floor-to-ceiling windows looking on Manhattan—like Oz); and other areas closed to the public entirely or mostly. Today also happened to be a day, perhaps the day, in which fans flocked to select their season-plan seats. Things in The Bronx were hopping more than usual. Even though the tour concluded with the more typical highlights of walking onto the frozen field (third-base-side, warning track only) and sitting in the visitors’ dugout, two oddities proved the most memorable for me. The placement of the organist, almost as an afterthought somewhere in the covered portion near the press area or where the public-address announcer, Paul Olden, works. Two, the wheelchair-access component of the visitors’ dugout. Cicerone Tony Morante permitted the group to photograph his championship ring to cap all warm feelings on a wintry afternoon.

Below: the original Yankee Stadium in stills, accompaniment by Mason Williams and Paul Mauriat.

Co-author of the book, "Right Off the Bat: Baseball, Cricket, Literature, and Life"
View all posts by rightoffthebatbook →
This entry was posted in Baseball, Yankees and tagged New York Yankees, Paul Olden, Stadiums, Tony Morante, Yankee Stadium. Bookmark the permalink.