Posted on October 25, 2013 by rightoffthebatbook 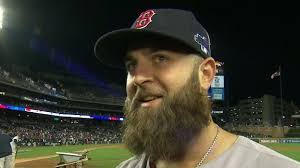 Mike Napoli will likely rest his beard on the Boston bench over the next three games.

Life has its oddities and ironies. I (Evander) didn’t know that Gillette Razor headquarters is only two miles from storied Fenway Park.

Of greater importance: the World Series is now tied a game apiece between the Boston Red Sox and St. Louis Cardinals. Carlos Beltran is showing his superb postseason form, which sadly left him when he was with the New York Mets versus the very same Cardinals franchise.

The Cardinals’s ownership is well known for keeping its uniforms neat and the best-fitted in Major League Baseball.

The Red Sox? Not exactly the neatest bunch I’ve ever seen.