The United States of Jeter

Posted on November 8, 2014 by rightoffthebatbook 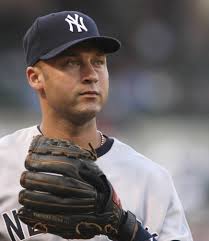 A lonely cab-horse steams and stamps.
And then the lighting of the lamps.

As summer unofficially ends, the 2014 MLB season concluded with a terrific run of postseason playoff games, it seemed the majority of them decided by a run too deep into the East Coast nights and early mornings. It was appropriate a couple of Wild Card teams faced one another in the World Series, and appropriate the Series went the distance, to the penultimate batter of the year winding up on third base and perhaps unwisely held by a KC third-base coach. Congratulations to the San Francisco Giants. As predicted in these blogs, the even-numbered year worked its magic on Bruce Bochy, Dave Righetti, Kung-fu Panda, and especially on Madison Bumgarner, who practically rewrote the World Series record book.

The season was marked by almost every club in the hunt, a disturbing and discouraging number of injuries to key players, an excessive resorting to extreme-defensive shifts. Low-run production in the post-HGH era represented a kind of detumescence: a return to a more normal and balanced form of the sport. Yet, there have been whispers of changing the rules, creating, as in pro basketball, illegal defenses to increase offense as fans, in spite of the competitive field-leveling of parity, were staying away from stadiums. (What baseball pundits found so revolutionary about extreme defenses was old hat to anyone from the cricket world, with the looser defensive positioning and designations of that game.)

The season also was marked by that long good-bye to Derek Jeter. It all became hopelessly, inevitably repetitive and culminating in its sincerity. Other players had had season-long farewells and “Days,” in recent memory and long ago. David Halberstam writes of Joe DiMaggio’s in 1949, several years before his retirement. But as one photo shows the still-unsteady (a rough season health-wise) Clipper looming over the pile of gifts including a bicycle (probably for Joe Jr.), the 2014 version was about as materialistic as could be imagined. Naturally, Jeter places most of the cash received by each American League (and some N.L.) team into his foundation, a terrific cause, and undoubtedly objects are being auctioned for the same reason. Yet, there was something unbearably scripted about it all, even to the great player’s deflecting of the spotlight. The postseason, which Jeter—though ending his Yankee Stadium career with a flourish—usually owns, and missed for one of the few times in his amazing career, proved a perfect antidote.