Baseball and Pythagoras; or, Finger Painting the Word Picture by Numbers

Posted on November 10, 2018 by rightoffthebatbook 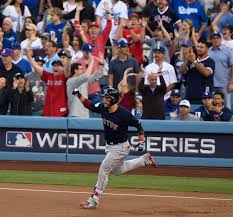 Journeyman as Most Valuable Player. The unexpected: What did you expect? (And you can bet on it!)

The Right off the Bat (ROTB) project was angled for the hallowed halls of Cooperstown this week. Since we have rescheduled for 2019, permit me (Evander), in this our 601st blog and with little else to do but count them, to consider baseball-by-the-numbers and its impact on a sport, on the major-league level, which is in revenue-and-national-interest decline if regular-season attendance and World Series-viewership figures are to be believed. (Attendance fell by more than three million: below seventy million for the first time since 2003. Already-dismal Series ratings plummeted 23 percent from 2017.)

Before considering this jaw-dropping numeric Decline of the West (or Western Divisions), here on numbers….

The earliest king of figures in space (geometry) and time (music), Pythagoras of ancient Greece and Egypt, defined numbers in three ways: quantitative (counting things), mathematical (abstract calculations), and qualitative (number as symbol: the refined-differentiating aspect of each number).

But aren’t numbers informing an orderly cosmos exclusive markers of the predetermined? The predictable? The boring? Is reality solely expressible in rational (“ratio”) units? Whence lieth the elements of Mystery and Drama?

None exists in a platonic, Newtonian, or pantheistic (cf. Spinoza’s Tractatus theologico-politicus) cosmos; nor does God play dice with the universe. Hello!

So what does any of this have to do with baseball? It is still a most-day-in-day-out-lifelike sport of the unpredictable and “intangibles,” right? The miraculous? We don’t know who will win or lose, correct? Or do we? Was the 2018 postseason the most predictable in memory? Yes, yes, and yes; and the trend is clearly turning off the fans.

Since the dawning of Bill James, baseball, especially professional baseball, has been dominated by so-called analytics. Organizations hire younger, faster, “scientificker” general managers and managers who spend hours, in stress and strain, crunching the numbers.

These can get pretty sophisticated. ROTB surveyed some of this trendy modulation five years ago in (Im)probabilities, a genially impudent and mostly subjective look at objective probability. A portion from that blog on the array of stats will cause all but the most spectral-eyed fans to number their days with their favorite pastime:

Twenty-first-century major-league talent is now regularly monitored via Statcast (essentially, a refinement of traditional Sabermetrics as is the ultra-complex BP: analyses of teams) with such generally accepted as well as esoteric stats as WAR (wins above replacement, sometimes rendered WARP, and a well-known stat today); secondary average; ERA+; FIELDf/x and Reaction Analysis (respectively measuring a player’s defensive value and how much ground is covered, as well as how quickly); DRS, UZR, and ISO (Isolated Power, derived by subtracting batting average from slugging percentage); contact rate; SR (spin rate); wRC+ (Weighted Runs Created Plus: a stadium- and league-adjusted power measurement); PECOTA (Player Empirical Comparison and Optimization Test Algorithm) projections; JAWS developed by someone named Jaffe to determine Cooperstown worthiness; UBR (Ultimate Base Running: self-explanatory); Launch Angle and Exit Velocity (both commonplace now and likewise self-explanatory); line-drive rate and contact rate (these also self-explanatory); Scoring Efficiency (SE); Scoring Load (SC%); and undoubtedly others, even a little older, like one of the first of the new-breed stats WHIP (walks-hits-innings-pitched: the lower, and even below “1,” the better: another older ueber-stat)) or DIPS (defense-independent-pitching-statistics); BABIP and FB% (fastball percentage); or, for offense, OPS, which combines on-base-and-slugging percentages. For improving pitching-performance the sabermetric way, there’s Driveline Baseball.

Beyond attendance, think I’m exaggerating? Amid all the numbers, the records’ keeping, once more permettez-moi to disclose that 2018 featured more MLB strikeouts than hits. Did you know that for the first time ever eight teams lost 95 games? In contrast three won 100, and the Boston Red Sox set a franchise-hallowing record of 108. We have not seen this degree of quality-polarization since the 1950s, when perhaps three or four clubs dominated a decade and attendance fell off the (multiplication) table. It all became too…probable and predictable.

Oh yes: two of the three clubs that spent the largest sum in payroll, needless to say, were the Red Sox and the Los Angeles Dodgers.

There is another number, which is music to no one’s ears, and it involves the measurement of time: The Baby Boom Generation, which supported baseball for decades, is passing into hypereducated oblivion. Youngsters largely find baseball a droning irrelevance.

Some at the top obviously hold sports gaming or the fantasy service DraftKing would be the way out of predictability, the ho-hum. This reality and thrill of gambling would be injected: no one fathoms what would happen next. Yet we do know that professional baseball and gambling have a long (and rich) history of being, well, at odds. Fans trust they are seeing results at the same time the players do. We soon “celebrate,” if any word could be right, the centennial-conspiracy of the Chicago Black Sox Scandal. This anniversary would coincide with our pilgrimage to the National Baseball Hall of Fame.

Other wet blankets maintain, perhaps correctly, that analytics may be the end of Hot Stove League leverage among even elite-level free agents. The numbers don’t lie. Baseball is an ever-more data-driven endeavor. There may be a logic to collusion among owners. But more likely, analytics show certain indubitable patterns with respect to players’ fall-off in production. That age is 32. We will not be seeing the Joe Nuxhalls or Bob Fellers anymore. Only the NBA signs teens. The baseball players’ union ought to examine its CBA with respect to when a player becomes eligible for full free agency.

MLB, as always (from ongoing discussions between Martin and myself), could take lessons in the entertainment-department (Shakespeare used an unusual number of hyphens) from the cricket world: successes and cautionary tales. To counter the stodgy universe of test cricket, T20 was hatched in the early 2000s. The more-fluid defensive positioning in cricket came way ahead of analytics-bred defensive shifts. (Tho there are negative whispers, to put the shift into the same category as the zone defense of basketball.) International cricket has had its recent share of gambling-related woes.

Of course, MLB could always juice the ball. The so-called dead-ball era ended a hundred seasons ago next year with that Chicago Black Sox Scandal. 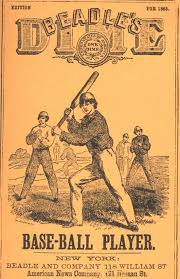 The stats, along with the times, were a lot simpler then. “Hit ’em where they ain’t!”

I’ll say it: Baseball is clearly in danger of becoming an old exercise in paint-by-number. Henry Chadwick, the stickler of Beadle’s Dime Base-ball Player, turns over in his grave.