Congratulations to R. A. Dickey

Posted on September 28, 2012 by rightoffthebatbook 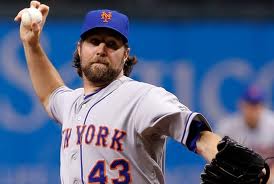 This photo of R. A. Dickey in action shows the unique grip of the knuckleball, a pitch that baffles batters and catchers alike. The ball does not rotate and therefore does strange things in midair.

Fans of the New York Mets have not had much to cheer about over the final ninety games of the 2012 season. I (Evander) attended only one Major League Baseball game this year: July 4, Mets versus the Philadelphia Phillies. Uncharacteristically, I had to leave in the sixth inning. Six-foot-ten Chris Young was cruising at that stage, up 2-0. But by the time I walked from my semi-nosebleed seat (I say that for a cheap laugh: virtually all seats and sight lines are excellent) to the outside of Citi Field, the Mets were already down 3-2; and by the time I reached home, I learned the final score, 9-2. The game was both the beginning of the end for the Mets and the season in microcosm.

But we do cheer R. A. Dickey, pitcher of the knuckleball, author of an unusually thoughtful memoir this season. Yesterday, at the last Mets home game, Dickey won his twentieth. He joins Tom Seaver, Jerry Koosman, Doc Gooden, David Cone, and Frank Viola as the other twenty-game winners in the fifty-years-plus history of the franchise.

(On October 20, Right Off the Bat blogger and former National Baseball Hall of Fame researcher Russell Wolinsky reminded me we had attended a Yankees game. I must have been numb: I thought that was last season: It was April 29 against, of all clubs, the 2012 A.L. Champion Detroit Tigers. Thus, I attended two games in 2012. Thanks, Russ!)

1 Response to Congratulations to R. A. Dickey