Posted on October 25, 2012 by rightoffthebatbook 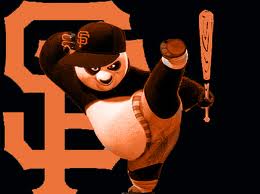 Tigers catcher Alex Avila quipped that he wants what Pablo Sandoval had for breakfast.

Two big pieces of news come out of last night’s Game 1 of the World Series.

First, the Giants’s Pablo Sandoval joins immortals Babe Ruth and Reggie Jackson, and eventual immortal Albert Pujols, as a member of the three-home-run club in a Series game. The big-boned third baseman far outshone Triple Crown-winning third baseman Miguel Cabrera—not to mention third baseman Alex Rodriguez, whose Yankees did not even qualify for this final series of the season.

Second, Justin Verlander once again melted under the klieg lights. There has been a certain suspicion, among Tigers fans, of Verlander in the big games. Suspicion was raised anew during Verlander’s atrocious performance in the 2012 All-Star Game, which ironically determined his role as the Game 1 starter in San Francisco. (The league that wins the All-Star game earns home-field advantage for their pennant-winning team, a rather silly recent ruling by Major League Baseball.) Concerns for Verlander in the big games seemed buried with the Oakland series and again, even deeper, with the Yankees series. Though in the latter, Verlander was not as overpowering as he can be: The Yankees were that lackluster. (Had the Yankees scored three runs in each of the first three games, they would have had a 3-0 lead against Detroit.)