Posted on November 29, 2013 by rightoffthebatbook 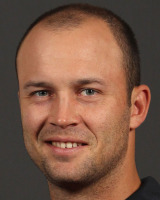 When the South African–born batsman Jonathan Trott joined the England cricket team in 2009, commentators noted how in taking his guard at the start of his inning Trott went through a routine of scratching at the pitch that could only infuriate the opposition. Yet Trott seemed unperturbed by the snide comments directed at him by the fielding aside as he amassed a world-class record in Test and one-day cricket, and soon enough became an immoveable and reliable number three in a very formidable top order.

Cricketers, like baseball players, are a superstitious bunch. Once they achieve success—or, perhaps, hoping to achieve that success—they follow a certain pattern: buttoning and unbuttoning their gloves, swinging the bat a particular number of times, running up to bowl or unwinding the pitch in a regular (if perhaps eccentric) way. It turns out, in Trott’s case, that the tics and quirks of his routine were a way not only of shutting out the negative comments of the opposition, but to still his own negative thoughts. But this system has now broken down, and he’s become the third England player—after Marcus Trescothick and Michael Yardy—to return home from touring because of a “stress-related illness.”

To its credit, cricket is reacting maturely to the revelation that one of the top players in the world has a depressive illness. Thankfully, the kind of macho, “can’t-hack-it-English-wimp” talk has been absent. It’s difficult to know whether there’s something systemic here, as opposed to the frailties of one individual, but it can’t help cricketers who may be prone to depression that they play so much cricket that they’re on the road virtually the entire time. It’s a lonely and highly pressurized existence—in spite of all the money and the battalion of therapists (physical and otherwise) that attend the big sides.

Trott’s departure leaves England in a hole. They lost the first Test in the series against Australia (not an unusual feat for this side, which mysteriously always seems to start slowly), and the momentum is all with the home team. Both sides have stated that the constant barracking being offered by one team at the other throughout the game has not undermined either side; but it’s hard not to come to the conclusion that England simply freaked out. Everything depends on the first day of the forthcoming game in Adelaide. If they’re not to be steamrolled by Australia, England will need to come out very strong: mentally, physically, and even verbally. And they will need to play out of their skins.

Co-author of the book, "Right Off the Bat: Baseball, Cricket, Literature, and Life"
View all posts by rightoffthebatbook →
This entry was posted in Australia, Cricket, England and tagged Jonathan Trott, Marcus Trescothick, Michael Yardy, The Ashes. Bookmark the permalink.