Posted on March 19, 2015 by rightoffthebatbook 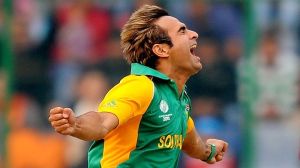 The cricket World Cup has finally moved into the business—i.e., knockout stage—end of the competition, and, so far, the quarter finals have offered up no surprises. Not even the mighty resistance of Kumar Sangakkara could prevent Sri Lanka from being defeated by a South African team that simply cannot be pinned down. All eyes before the game were on A. B. de Villiers (would the batting line up be over-reliant on his explosive genius?) or Dale Steyn (when would the crowd get to see the fearsome fast bowler’s eyes and jugular vein bulge in pumped-up aggression?). As it turned out, it was South Africa’s mild-mannered off-spinning all-rounder, JP Duminy, and its expressive leg-break bowler, Imran Tahir, who brought the Sri Lankans to their knees, taking seven wickets between them. (Duminy became the first bowler in a world cup to take a hat-trick—that’s three wickets in three balls, for our baseball friends.)

You’ve gotta love Imran Tahir. Like England’s sometime off-spinner Monty Panesar, Tahir is an exuberant cricketer. His appeals for the wicket are operatic, and his celebrations on snagging a victim often involve a madcap sprint, arms flailing, in the direction of nowhere-in-particular. You get the feeling that Tahir, like Monty, is slightly insecure about his position in the side. It’s perhaps no coincidence that he’s grown a full beard—not merely to copy his teammate Hashim Amla, but to reinforce his sense of being a Muslim in a predominantly non-Muslim side—and that that inner confidence and sense of self-identity have allowed him to settle and unveil the full mysteries of leg spin. That batsman-wicketkeeper Quentin de Kock, who’d had a fairly dismal tournament so far, came into his own against the Sri Lankans must further reinforce the confidence of the South Africans.

Meanwhile, in a result about as surprising as Ian Bell making an attractive fifty and then getting out, India steamrolled Bangladesh into submission. Tonight/tomorrow, Australia will most likely do the same to Pakistan.