On Bell-Ringers and Cricket

Posted on March 30, 2015 by rightoffthebatbook 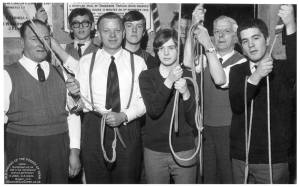 In the wake of England’s ignominious, deeply embarrassing, nay humiliating exit from cricket’s World Cup—won this last weekend by a resurgent Australia—I (Martin) find myself reading Can We Have Our Balls Back, Please? How the British Invented Sport (And then almost forgot how to play it) by Julian Norridge (rhymes with “porridge”). Naturally, I am thoroughly enjoying the cricket section of the book, among which I find the following gem:

The 1720 edition of Snow’s Survey of London mentioned cricket for the first time. It classes it as an amusement of ‘the more common sort’ of people, along with such vulgar activities as football, wrestling, drinking in alehouses, and bell-ringing.

Now, I don’t know about footballers, wrestlers, or imbibers of alcoholic spirits in public houses, but I’ve always had my suspicion about campanologists. Oh, they may claim that all that rowdiness was in the past, but judging from their anthem, performed by the estimable Anita Ward, bell-ringers are still a pretty sketchy lot.

Co-author of the book, "Right Off the Bat: Baseball, Cricket, Literature, and Life"
View all posts by rightoffthebatbook →
This entry was posted in Australia, Cricket, England and tagged World Cup. Bookmark the permalink.