Posted on May 9, 2012 by rightoffthebatbook 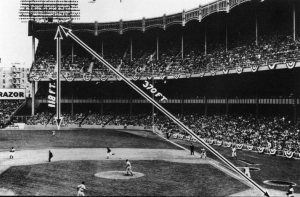 Trajectory of a true Ballantine Blast. Another photo re-creation (below) shows the moonshot (yes, it was a night game) soaring, wafting a little, bending to the right of the lights, which would not have been cleared in the present photo. A launch angle of 50 degrees is considered extraordinary (90 degrees would be a home run in an elevator-shaft).

May 22, 1963, Yankee Stadium (the original of course), a night game, Mickey Mantle almost bombs a home run clear out of the park. In subsequent interviews, Mantle considered it the hardest he ever hit a baseball. (He said the same about one in 1956, a six-of-one-thing-half-a-dozen-of-another surely: see below.) Bill Fischer was the pitcher off whom this satellite was launched, long before Launch Angle was a gleam in Sabermetricians’ eyes.

It followed by almost exactly seven years (May 30, 1956, though this date and “tail” are questionable in several ways) a similar home run that struck the Stadium facade on its descent. Funnyman Billy Crystal, who says he read the Torah in an Oklahoma drawl at his Bar Mitzvah, out of his Mantle-fandom, recounts being at that game, with his father.

According to Mickey Mantle himself, in My Favorite Summer 1956, in the fifth inning of the first game of a Memorial Day (May 30: yes, a Wednesday, a practice ended in 1971) doubleheader, with the score tied 2-2, he smacked “the best ball I ever hit left-handed [see the first paragraph, above]. It was a high drive that came eighteen inches away from going out of the Stadium. Nobody ever hit a fair ball out of Yankee Stadium and the reporters made a big deal of the shot I hit off [Pedro] Ramos.” Other sources indicate the spectacular home run was knocked off Camilo Pascual, though in his book Mantle places Pascual in the dugout waving a towel at Ramos. Here is the box score, which substantiates Mickey Mantle’s memoir. (He was batting .430 and even stole a base during that game.)

Surely announcer Mel Allen, the Voice of the Yankees, would have almost fallen out of the broadcast booth. Both times.

Again in My Favorite Summer 1956, Mantle notes that the 1963 ball cleared the wall 370 feet away from home plate (per the illustration), and that the Stadium roof was 117-feet high (not quite 118 feet, marked in the photo).

(A 1987 book by Mark Gallagher covers all the bases: Explosion! The Legendary Home Runs of Mickey Mantle.)

Estimates of a 600-foot or even 734(!)-foot blast had the Stadium facade not got in the way as the ball was still rising are possibly “over the top.” But this certainly was a shot heard round the world—or at least the Bronx. It is the stuff Legends (and Dreams) are made on.