Posted on May 6, 2013 by rightoffthebatbook 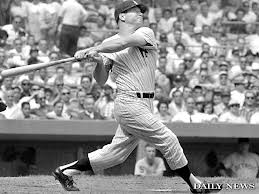 The mighty swing that inspired Billy Crystal to conduct his Bar Mitzvah in an Oklahoman drawl. (The photo, as you see, is from the Daily News.)

I (Evander) have waxed perhaps not-so-poetic(ly) on May 22 as the upcoming jubilee of the home run Mickey Mantle nearly launched out of old Yankee Stadium. Some estimates have the ball traveling something like 730 feet. More realistically its distance, had the roof of the upper deck not got in the way, would be 200 feet fewer. Still….

My cousin, who was listening on the radio late, once said that Phil Rizzuto, then a newish announcer (though Mel Allen had probably re-created the moment for posterity: this video is no longer available, possibly because it is a poor re-creation), almost fell out of the press box. But as we will see memory, and “the tall tail,” can be a tricky thing; facts slippery.

Mantle always said it was the hardest ball he ever hit.

We repeat, mere muscle and power are not our thing at Right Off the Bat Project. But momentous is momentous; monumental is monumental. Therefore, let us celebrate the anniversary of the first ball (maybe! if not the previous August: cf. the next paragraph) Mantle almost propelled out of the Stadium during the course of a game: May 5, 1956,* this off pitcher Lou Kretlow.

There were others, documented by the pitchers themselves and confirmed by different players, so “the longest” was not a dubious boast of self-acclamation. These other Mantle balls almost rocketed out of the Stadium in fair territory include: (1) August 7, 1955, against Babe Birrer of Detroit, and (2) June 23, 1957 (a massively attended Sunday doubleheader), off Dick Donovan, a career-star pitcher then with the White Sox.

(Comic Billy Crystal, for years, claims to have been in “Louie Armstrong seats” among the 12,773 spectators that Saturday [May 5] “afternoon” [we presume afternoon]—he says it was his first ballgame at the age of eight. [One source lists him aetat. 9.] Yet the date he typically ascribes is May 30, 1956, the middle of the Long Island-school week [It was not Memorial Day Weekend, as Crystal says, though there was the doubleheader. I’m not sure why they played two. Mantle excelled in each ballgame.], which for an eight/nine-year-old, receiving a Mantle-signed scorecard in The Bronx nighttime, doesn’t seem completely feasible. But Memory, mother of the Muses, it is via those goddesses from whom we get the word museum, can be a comedic-timed thing indeed. No wonder Mantle doesn’t remember what he was doing, on the field, on May 30, 1956.)

The May 5 box score can be found here. The frieze-striking blast was served up either by Kretlow (shown by other research) or late by one Moe Burtschy.

(Note: Don Larsen, who would throw a perfect game in that year’s World Series, before a lot more fans [64,519 to be precise], came in to relieve for the Yankees.)

Mantle would win the Triple Crown during the regular season. Billy Martin (not Crystal) batted just ahead of Mantle, and had not yet been traded to the opposing team, the Kansas City Athletics, as punishment (in part) for his participation in the infamous Copacabana brawl. The ugly incident at the nightclub would take place almost exactly one year later.

Back to our century, I understand that the United States (or perhaps North American) cricket season opens on Cinco de Mayo, 2013. I’m sure not much cricket is actually played in Mexico or France. It is from their conflict, the holiday derives.

* In early May, Mantle had 11 home runs and was batting an otherworldly .446. In mid-August, he was still hitting .376. Nineteen-fifty-six showcased one of the all-time great single-season offensive performances by any major-league player.